In the beautiful North Island of New Zealand, Lake Taupo is drained by the monstrous Huka Falls of turquoise and crystal blues, gushing past at incredible speeds…

Notorious for it’s beautiful landscape (and if you forget about the Earthquakes), New Zealand is a must-visit home to some beautiful waterfalls.

If you’re headed to the North Island of NZ, you have to visit the incredible Huka falls (pronounced Hooka, unlike the legendary Hukka performed as New Zealand traditional dancing). Just thought I’d mention that one.

I got to experience the Huka falls while being thrown around on a jiggling Contiki bus (since the road to them is thin and windy). We were stopping at Lake Taupo for the night and swung by the falls on the way. But if you don’t have the luxury of being on tour – they aren’t too hard to find. Simply follow the signs; or refer to the maps below.

When we arrived at the falls, I stepped off the bus into a chilly, breezy air and could immediately hear the rush of water. The carpark is situated right next to the falls and the bridge in the above cover photo, so they’re not difficult to get to by any means.

I rushed eagerly towards the foot bridge and got my first glimpse of the Huka falls. The falls are so powerful, with gushing water rushing past ferociously below. Seemingly, the falls are not coherently dropping downwards, like most waterfalls do. At least the don’t seem to…. In an odd way, they seem to be kind of flat… But, of course, that’s not the case.

The stone bridge built across them makes it seem like a fast-moving river (we soon learned 220,000 litres-per-second), but if you venture to the second viewing platform, another 600m or so down the track, you can see where the falls drop down and become the Waikato River.

I stood, mesmerised by the bright turquoise colour of the falls. Plenty of waterfalls show white froth and clear water, revealing the rock behind them. But this, this was something else. The copious amount of water in these falls creates the most incredible blues. It is a great spot to stare and ponder your insignificant size and power in relation to parts of nature. I had to giggle at that.

You’d never be able to swim in these falls, unfortunately. However, you can go on ‘speed boat rides’ down parts of them and into the river that flows onwards – get in touch with Huka Falls Jet if you’re keen! But for me, simply standing and gazing was more than enough. 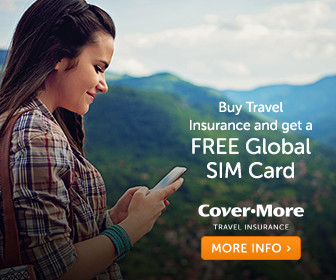